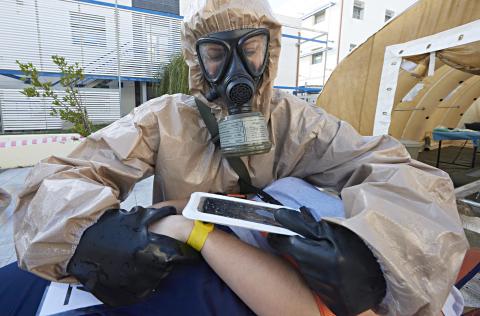 Imagine a CBRN crisis and blue light responders in the middle of the chaos deploying sensors, drones and using hand-held detectors to get meaningful CBRN information to enable situation awareness. Imagine these responders’ teams tagging casualties and tracking them and their medical treatments. Imagine a command and control room where all this information is retrieved and centralized for the crisis commander, enabling informed decision making, facilitating an effective response and accelerating the recovery. That all happened at TOXI-triage FOCUS exercise in Athens last October.

The FOCUS scenario simulated a chemical incident in an airport. Three critical segments were considered where TOXI-triage concepts and technologies were used to enhance response capabilities:

A big team made up of project partners, HMOD military personnel, Greek authorities, project advisory board members and European Commision representatives participated in the exercise either as technology providers or observers.