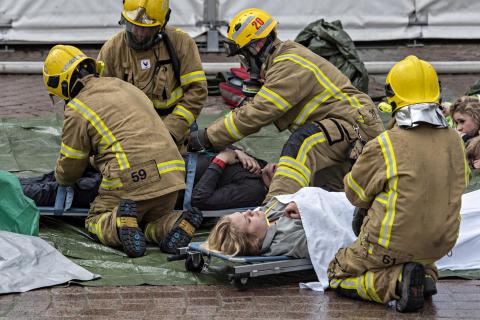 DISPERSE scenario simulated a chemical incident in a town centre. A van parked at the Market Square starts to release a dense plume of vapour that blows across the ground and through the stalls and cafe seating located around the square.
Some people in the square are immediately overcome by the vapour and many others complain of irritation of eyes, nose and throat. Others start to report chest pain and breathing difficulties. This was the starting point of the exercise.
Three critical segments were considered where TOXI‐triage concepts and technologies are envisaged to enhance response capabilities:

In this large-scale simulated CBRN incident TOXI‐triage's technology and operational proposals have been evaluated. Handheld and drone mounted chemical and radiological detectors, breath analysis technologies, tag and trace devices, hyperspectral detection systems and the social media connector collected a variety of types of data from the field and sent them all to the Integrator, enhancing incident commander situation awareness and supporting informed decision making.

Congratulations to the TOXI-triage team!!!